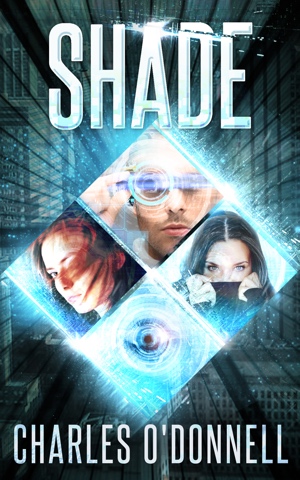 When the lie is more convincing than the truth, how can I tell what’s real?

Three lives bound together in a struggle that will decide the fate of the world: Dylan, searching desperately for his lost mother—Grace, risking everything to reunite with her son—Madeleine, scheming to force all of humanity into a permanent virtual existence. As the fiery demagogue Dax rises to power on a promise to eradicate the secretive Shade, the conflict escalates, Madeleine and Dax on one side, Dylan and Grace on the other. In the middle: a tiny community outside the Worldstream, faced with a life-or-death decision—ignore the threat and slowly perish, or make a stand for the last vestige of Real Life.

Shade is the exciting second book in the Shredded series, continuing the stories of Grace, Dylan, and Madeleine in a near-future world in which nearly all human activity takes place in virtual reality.

★★★★★ Shade sets itself apart with a believable, consistent world, nuanced philosophical concerns without providing easy answers, and a format that lends itself to aggressive page-turning. Mark, Amazon Purchaser

★★★★★ In his sequel to “Shredded” Mr. O’Donnell has firmly established himself as a solid force in the world of dystopian fiction. Tim Allen

Shade is available on Amazon for Kindle and in paperback.

Little kids running in crazy circles, playing a game Dylan didn’t know—one boy chasing the others, who froze in place when he touched them. A scattering of chairs. Adults sitting and standing, drinking and chatting. Two tables, one covered in food, another piled with boxes wrapped in bright paper. And by the gift table, a flat, human-shaped void, utterly black, outlined in a narrow rainbow, shimmering as it moved.

“This is so lo-res,” Wayne said. He and Dylan had jacked into an outdoor venue. They slouched against a home with a lawn, the kind of property only the well-off could afford. “It’s not even your house.”

Dylan went to the gift table, Wayne in tow. The tags on the presents all said the same thing: “Happy Birthday Leeza.”

“I thought your mom’s name is Grace,” Wayne said.

“Yeah,” Dylan replied. “This isn’t her place.” He looked at the void, which now appeared to be picking up boxes and shaking them, wrapping paper disappearing under a hand-shaped hole wherever the void held it. “That’s not her.”

Dylan turned away from the table. “Connor, next venue.”

The party scene dissolved into a virtual classroom, with desks in rows and columns. Students sat at all but three of the desks; those three were occupied by featureless child-sized silhouettes, the same bottomless black as the birthday girl’s, their rainbow outlines noticeably broader.

“They look different,” Wayne said. “Why are the edges so fuzzy? The last one we saw was a lot sharper.”

“The last one was newer. The older they are, the fuzzier they get. Connor, time and place.”

“Was your mom second quartile?”

“No,” Dylan snorted, “first quartile. My mom is smart.”

The professor took roll, each student in turn raising a hand and responding “Present” when his name was called, until one black image raised a hand, the rainbow blur barely recognizable as an arm. There was no response, only silence.

“Can we get out of here?” Wayne complained. “I found a new lifestream I wanna show you—guys kick-boxing. It’s ultra-hi-res.”

“You said it’s not even your mom’s school!”

“Not yet,” Dylan repeated.

The professor continued down the roll. When she called the name Ellis, the second void raised its hand without a sound.

“So what is this thing? A scar-crawler you called it?”

The prof went down the roster. She hadn’t yet called on the third void.

“Yeah. It crawls the blockchain for broken links. Then it collects residual data and reconstructs the venue.”

“And these black blobs—they’re dead people?”

“They’re called scars. Spots where there was data before, and now there’s nothing. They’re not dead, they’re shredded.”

“Oh, yeah. Like your mom. All her data ripped out of the Worldstream. Freaky.”

The prof called the final name—Roxanne. The last of the three scars raised its hand silently.

“Hey, tell your guy Conner to take you to Blood Sport Arena Preview. They let you ride five minutes for free. It’s awesome.”

“Go by yourself. My aunt doesn’t let me go to those things.”

Dylan’s avatar wore sunglasses and a brimless cap over his short-cropped red hair. Dylan liked his hair to be “low maintenance,” as he’d told Wayne. “My life’s simpler if I don’t have to mess with my hair.” Wayne wasn’t sure if Dylan’s hair was really that short however—it had been more than two years since they’d met IRL. But it couldn’t have been too much longer. The Worldstream didn’t permit drastic differences between a user and his avatar.

“Then Aunt Donna won’t know. She’ll think you’re off on some cultural exchange, or touring some creepy ancient museum.”

Dylan took off his sunglasses. His brown eyes made him look older than his sixteen years.

“Hike in the woods,” he offered.

“There, see? When she checks your log, she’ll see you running around in the forest when you’re actually watching some massively hi-res ass-kicking.”

“What if your Happy Face doesn’t work?”

“Jah, bro, if you don’t wanna go kick-boxing, just say so. Do whatever you want; I don’t give a shit.”

“Dylan, do you have a command for me?” Connor’s voice asked in Dylan’s headphones.

“In a second, Connor.” Dylan put his sunglasses back on. “I’ll keep at this for a little longer.”

“Fine. But there’s nothing wrong with Happy Face. I coded it myself.”

“Frobnitz. Happy Face is the best protection money can buy.”

Wayne’s avatar flattened, then broke into horizontal lines, like a raster scan, before winking out. Dylan lingered in the classroom a few more minutes.

These students are grown now, he thought, in their thirties.

Some of them might even be dead. Exactly three of them had shredded their lives.

Dylan skipped from one venue to the next—an office, where coders built elaborate virtual worlds; a concert of old-fashioned music—Classical Dylan thought, but he wasn’t sure if that was the right term, perhaps Baroque was more like it. On to men playing baseball, a game Dylan had played in VR venues as a boy, though he didn’t enjoy it much and hadn’t seen a game since. In each venue, he saw at least one human-shaped black hole with a rainbow border, some sharp, just a fringe of color, the outlines of very recently shredded people; others so broad and indistinct as to look like little more than a smear of color, the shredded remains of someone who checked out decades ago. None of them were Grace.

The image in Dylan’s visor came into focus. It wasn’t a baseball game, classroom, birthday party, or any other recognizable human activity. He wasn’t sure if he was inside or outside—the sky overhead was purple, changing to blood red as it approached the horizon. Except, he couldn’t see the horizon—his view was blocked by hundreds of ink-black phantoms, fringed in rainbows, from broad and blurred to razor-sharp.

The crowd moved aimlessly, brushing past one another, sometimes touching, their prismatic outlines merging, two or more human forms melting into one another, forming grotesque shapes with two heads or four arms. The scene was not merely silent, but completely devoid of sound, like a super-anechoic chamber sucking up every last decibel. Dylan felt as if the chamber could absorb his breath, drawing the life out of him. A scene came to mind, a passage from an ancient poem he’d once read, of Odysseus in the realm of the dead:

The souls of the perished came up out of Erebos: young men and long-suffering elders; brides and maidens, and fighting men killed in battle at the points of bronze spears, their bloody armor still upon them. They came swarming from all directions, and terror took hold of me. Then there came to me the soul of my dead mother, still alive when I left for sacred Ilium. I broke into tears at the sight of her and my heart pitied her, but for all my sorrow, I would not let her draw near.

The phantoms moved closer. Dylan tried to get out of their way, but he was surrounded. His chest tightened as they closed in; his breath came faster, until he went light-headed and his vision clouded. He pulled his arms close, crossing them over his chest. A shadow reached out, the hand of a shredded soul, taking hold of him. His arm vanished where the phantom held him, a black band around his wrist, edged in shimmering color. It felt painfully cold.

Dylan’s wrist reappeared, the shades of the shredded melting together into blackness, the purple-red dome fading to the featureless white of his staging venue.

Dylan yanked off his headgear and gloves. He fell forward, elbows on knees, panting hard.

“Dylan, are you all right in there?” his aunt Donna asked through the door.

Dylan held his wrist where the scar had gripped him. His arm was shaking.

“Of course. I’ll get it. I’m sure hiking all day in the forest can make you thirsty.”

Donna brought Dylan a water bottle and he drained it in seconds. He closed his eyes until his pulse slowed and his hands stopped trembling. He took a deep breath as he slipped on his gear.

Shade is available on Amazon for Kindle and in paperback.