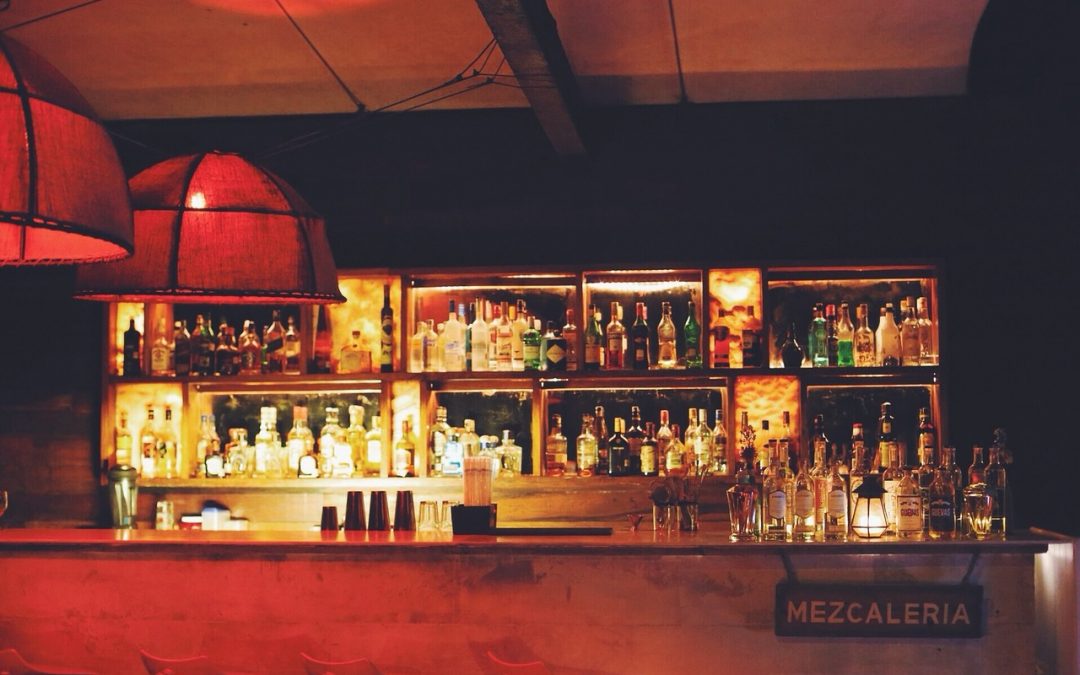 In the afternoon, after lunch but before happy hour, Gabe cleans the glasses. The stemware—wine goblets, champagne flutes, martini glasses—he hangs from racks in sparkling rows; the highball and whiskey glasses he arranges top-down on transparent shelves jutting from a mirror, the glassware and their reflections floating in space. He straightens the liquor bottles, spacing them evenly, like glowing glass charms on a bracelet. He flips his towel over his shoulder as he steps back to take in the total effect: rainbow points of light reflect from every glass facet; bottles of amber liquid glint like gold. The sight reminds him of a Buddhist temple.

In the mirror Gabe sees the door open. A silhouette enters, a man, Gabe guesses from the size and shape. The door closes and the man’s face becomes visible.

Gabe turns and leans against the bar as Corey takes a stool. “Afternoon, Corey,” he says, his smile thin. Corey grins.

Gabe pulls the towel from his shoulder. He mops the spotlessly clean bar. “Joan’s home on Wednesdays.”

Corey looks over the array of glasses and bottles, then turns his eyes to the décor, looking in all directions, while Gabe cleans the bar.

“Anything I can do?” Gabe asks, breaking the silence.

Corey’s drumming his fingers on the bar. Gabe decides that the bar is clean enough and tosses the towel in the hamper.

“Business good?” Corey asks, looking up from his drumming fingers.

Corey taps all his fingers at once. “Couple leads. Nothing solid.”

Corey sits up straight. “Oh, looky here.” He digs into his pocket. He lays two wrinkled twenties on the bar. Gabe picks them up and inspects them.

“Where’d this come from?”

“I won a scratcher.”

Gabe purses his lips. “Thanks.” He opens the cash drawer, flush with bills. He stuffs in the twenties and shoves it shut. “I’ll tell Joan.”

Gabe pulls a lime from the cooler. He slices it into wedges, filling the garnish tray. “Anything else?” he asks.

“Sure.” Gabe gets a glass from the shelf, destroying the symmetry of the array. He pours a carefully metered shot.

“What about the scratcher?”

“Those twenties were it.”

Gabe replaces the bottle on the shelf, perfectly centered in its spot. “Family drinks free anyway.”

Corey downs the shot. He gets up from the stool. “Thanks, Gabe. See ya.”

Gabe and Corey exchange obligatory smiles. Gabe waits until Corey’s out the door before picking up the phone.

“Your brother stopped by.”

“Joan,” Gabe says, like a father disciplining a child.

“What?” she says, as if she knows what’s coming.

“Not one more dime.”