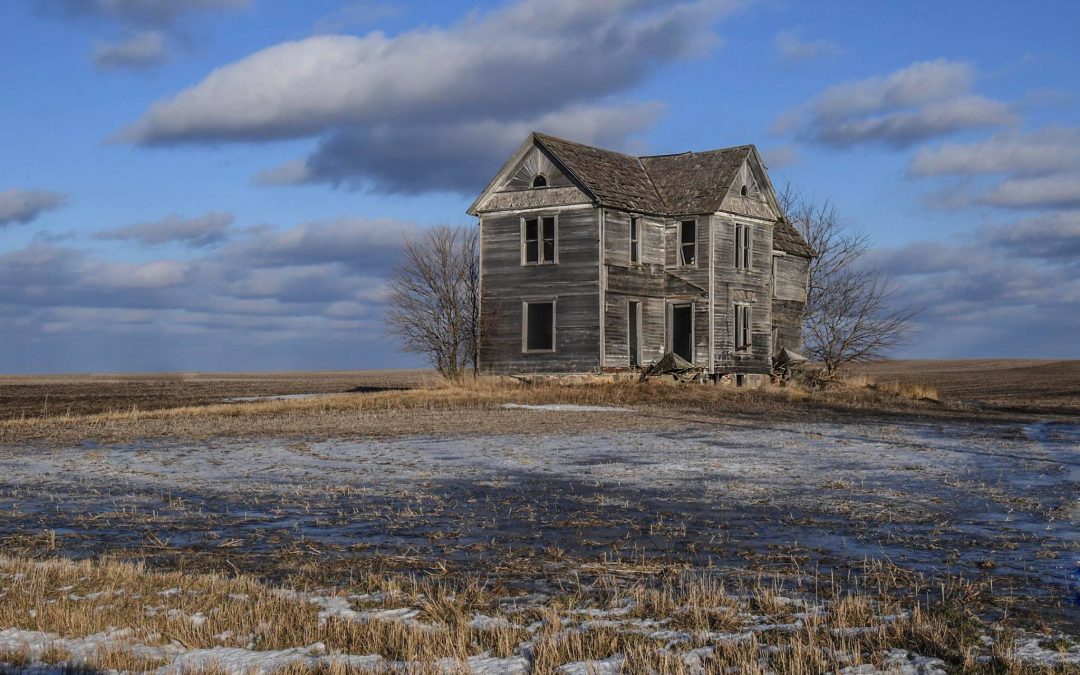 From John Gardner’s The Art of Fiction. Write a passage describing a building, a landscape, or an object, but imagine that you’re writing from a particular point of view. Try to evoke the feelings of the narrator without mentioning them. There are two examples.

The point of view will be revealed at the end of the post.

The house is old, seven decades at least, and looks it, window and door sills sagging, shingles missing, the consequences of wind and hail storms in the course of its existence, paint peeling from its sides, the accumulated layers showing in patches, in colors chosen by a succession of owners. I force open the door and ease inside. It’s empty, I know it is, instantly, without checking. It sounds empty, it smells empty, it feels empty: my footsteps echoing in rooms without furniture, from windows without curtains; a dusty, lifeless odor in my nostrils; a shiver. I’m in a main room, the living room, I suppose, what they might have called a parlor when the house was at the start of its life, a family gathering place. There was laughter here, both heartfelt and hollow, and sadness, of course, and sharing–uncertain prospects, improbable hopes, impossible dreams–bright futures turned bitter, great expectations unfulfilled. It’s vacant now, this house, showing its age, the evidence of a long life. Its occupants are gone, their memories lost. But at least they had memories. At least this old house had a life.

I was ten years old before I knew that baseballs were white. Every ball I’d ever seen was a muddy green, like this one, thrown and hit and chased until it turned the color of grass and dirt, the cover scuffed and split, the laces frayed, worn out from a hundred pick-up schoolyard games. The first new ball I had ever seen, clean and white, with crisp, red stitches, was a birthday present, at an age when my hand had grown, finally, large enough to grip the ball with confidence, to throw it with accuracy, still small, though, the hand of a boy, a mere hint of the man to be. I put away my old green ball, trying my best to preserve my new one, fresh and clean, but that ball aged, just as this one has, until it, too was grass-colored and worn. I’ll put this ball away now, and take it out from time to time. There will be no new one.

– From the point of view of a parent whose child has just died.
Photo credit: Bob Kelly