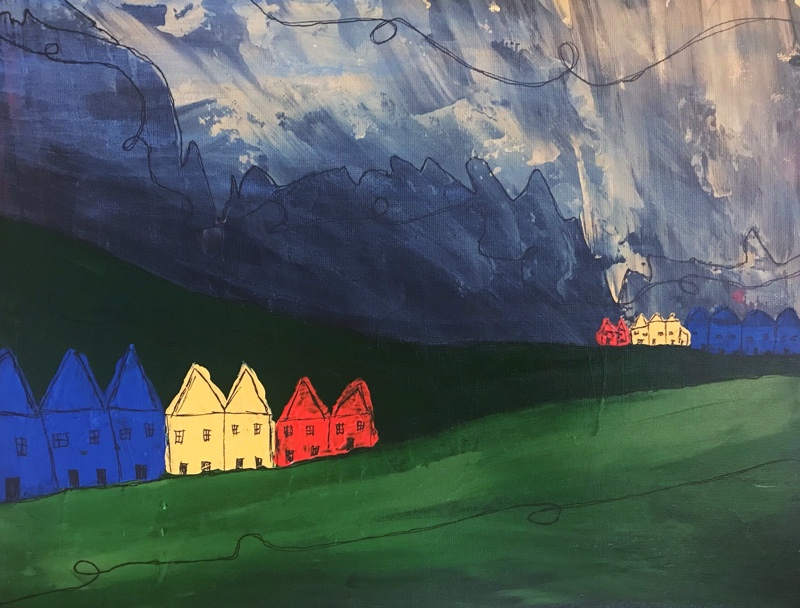 Mr. Card was the biggest man in Columbia Valley. He lived in the biggest building, more like a tower, really, nothing at all like the little boxes the rest of us lived in. Mr. Card told us that he owned all the boxes, too, and we knew that wasn’t true, but he must have owned a lot, because he wouldn’t say it if it wasn’t mostly true.

Some said that we couldn’t keep letting people from the other towns come here. Mr. Card said it more than anyone, and the more he said it, the more people in Columbia Valley said it, too, mostly people who were thinking it already, but didn’t say it out loud. They didn’t say it because most of us didn’t understand why it was a problem. The newcomers seemed like good people; we made friends with them, and when they moved into their box houses we lent them money, and sold them food and clothes and things for their houses. It was good for everyone. But Mr. Card, who was very important, said that it wasn’t good, and a lot of people believed it, because he wouldn’t say it if it wasn’t mostly true.

That was before the trouble. We all remember when we first heard about it—an angry man with a gun shot ten people, and eight of them died, including the man who did the shooting. It was the worst tragedy anyone in Columbia Valley could remember. We’re still recovering many years later. But that was just the start of the trouble.

We’d had tragedies before—what town hasn’t?—so we should have been okay, after it was all over, and we might have been, but Mr. Card said we couldn’t be lazy about keeping Columbia Valley safe. He told us what we had to do, and a lot of people agreed with him, that we had to keep the people from the other towns from coming to Columbia Valley, because the man with the gun was a newcomer. And we had to keep an eye on the newcomers who were already here. Mr. Card told us how we would know them. They were easy to spot: the man with the gun lived in a red house.

Then the trouble came to a head. Mr. Card said that Columbia Valley couldn’t allow the danger to stand any longer, and that the people in the red houses had to go. He gave the order that all people in red houses had to leave Columbia Valley in one week, or he would have the police throw them out. Most of us thought this was wrong, but there were only a few red houses, and if the rest of us in our white and brown and yellow houses were left alone, maybe we could let a week go by and all of this would pass. And what if the people in the red houses really were dangerous? After all, Mr. Card said they were, and he wouldn’t say it if it wasn’t mostly true.

That was a busy night indeed.

On the morning of the deadline, the police came into our neighborhood to get the people in the red houses. But they decided that maybe they shouldn’t carry out Mr. Card’s order after all. Because all the houses were red.

Mr. Card was very upset. He said that all of us who painted our houses red were just as dangerous as the the man with the gun, or the newcomers, or the people who lived in the red houses when there weren’t very many. We didn’t believe him, but there were still some people in Columbia Valley who did, because they wanted to, mostly, and besides, Mr. Card said it. And Mr. Card wouldn’t say it if it wasn’t mostly true.